IPM was established in Dublin in 1950 to develop exports of Irish seed and ware potatoes to the Mediterranean region after World War II.

1970’s:  IPM began investing in breeding of new potato varieties in association with Oak Park Research Centre in Carlow, Ireland, one of the largest and most advanced potato breeding programmes in Europe.

1990’s: IPM established ‘IPM Perth Ltd’ in Scotland to manage seed production of IPM varieties for the UK market and exports.  During this period IPM also became a subsidiary of Donegal Investment Group plc, one of Ireland’s largest food and agri-business companies.

2000’s: IPM established IPM Holland BV in The Netherlands to manage seed production of IPM and free varieties for export.

IPM takes great pleasure in inviting you to visit our Open Days in Emmeloord this November. Come meet the team and view the display of our varieties. There will be refreshments on offer and a buffet lunch served between 11:00 … Read more…

We are delighted that Nectar has moved up two places, to 4th place, on the 2018 list of top ten potato varieties grown in the UK, as complied by the AHDB. 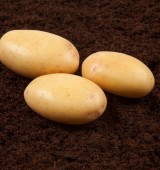